Some jobs make you feel happier about what you do.

At the age of deciding which direction to set out on in life I was most taken with the idea of the Artisan.  I decided that in one way or another my guide through life would be in the attempt to attain the level of skill and expression that would one day lead me to be capable of making something truly special; something with an indefinable quality that would let me know that I had somehow arrived somewhere.  My decisions all revolved around me and my path.

It was a few years into my work life that I started to question my decisions.  As much as I loved the work that I did, I was becoming increasingly aware of those around me and the positive difference they made to others with their professions.  Many of my friends were teachers or nurses and suchlike.  I began to feel a guilt about my self indulgent work life.

I can’t remember who it was exactly, but it was one of my customers; they laughed at my concerns and asked me what the estuary would look like without beautiful wooden boats here and there, and how would the world feel without the arts.  He then asked me if I had the abilities to be a teacher or a nurse…. He both put me in my place and gave me the justification for it.

I was asked three years ago to Tidy up the gable end of a boathouse on the beach In East Portlemouth with the focus of the work being a carving of a boat in the centre of the glass window.

Quite why I took three years to climb the ladder and take a pattern for the window I am not quite sure, the customers are great and the work really suits me.  I think maybe it was the public nature of the work, whilst I have great confidence in taking apart a yacht and putting it back together, or else making pretty much anything out of wood, my confidence when it comes to public presentation is delicate to say the least.  To write this blog requires not so much confidence, rather a leaning towards a kind of recklessness. 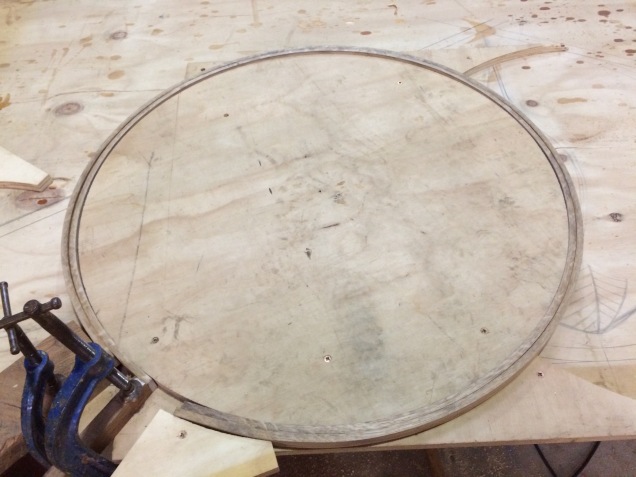 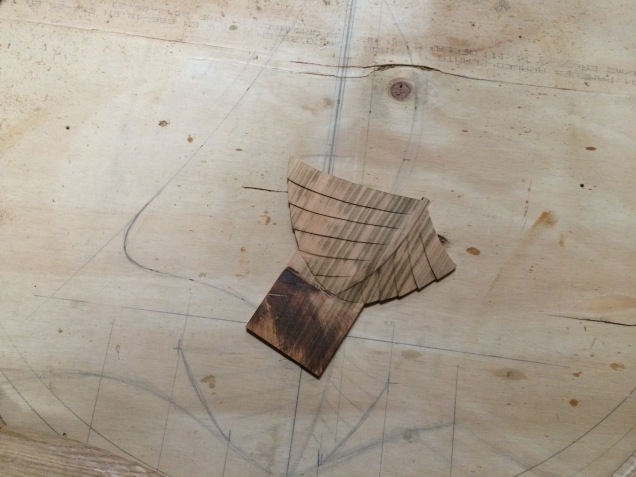 The sails after laminating are shaped.  I like them in their own right simply as forms.  It often happens that in making some piece of work or another you end up having to produce some part which will inspire in itself, these in turn become seeds for new ideas or give solutions to other problems in the future.  The little hull was carved from a piece of Sweet Cherry that came from the village.  Little of my carving has been figurative, so to carve a hull shape that looks like its coming towards you but not directly, out of a piece of wood that has a depth of just 3/4″ was a little intimidating before I set to work.  As is often the case though, as soon as my tools are in my hands it all goes fine.  The clinker planking made the illusion of the hull much easier to pull off as well as symbolising the traditional boats of the salcombe estuary. 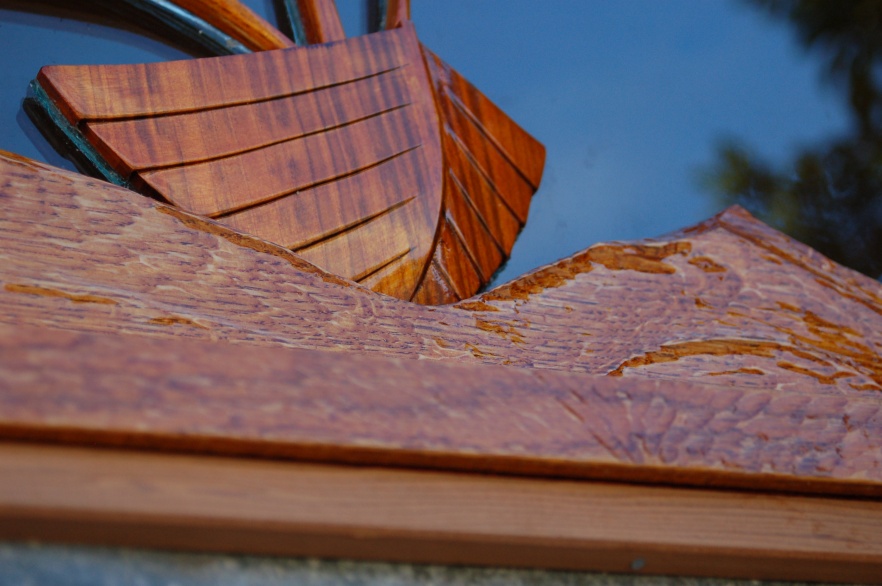 When you make things for a living sometimes unexpected problems can surprise you; that may be unprofessional to admit but it’s true.  Sometimes though; unexpected positives can happen…. The effect of the glass in this piece has added much more to the carving than I gave it alone; the rich darkness of the window complements the rich woodwork beautifully and the reflections give the whole piece much more dimension.  Perhaps to appear more professional I should claim to have planned that, but that wouldn’t be true…..  I like the unexpected additions.

I’ve always been fascinated by the texture of water.  I admire the painters who can capture water texture in a literal manner and like the idea of one day trying to do likewise in carving.  Nothing so difficult with the water for this piece though.  What I need to do here is give the impression of water, an exaggeration.  The process is then quite simple; take the forms seen in water like defined edges, sharp points, overlaps, ripples, blend them all together in a watery sort of way and then make it all shiny……. like water. 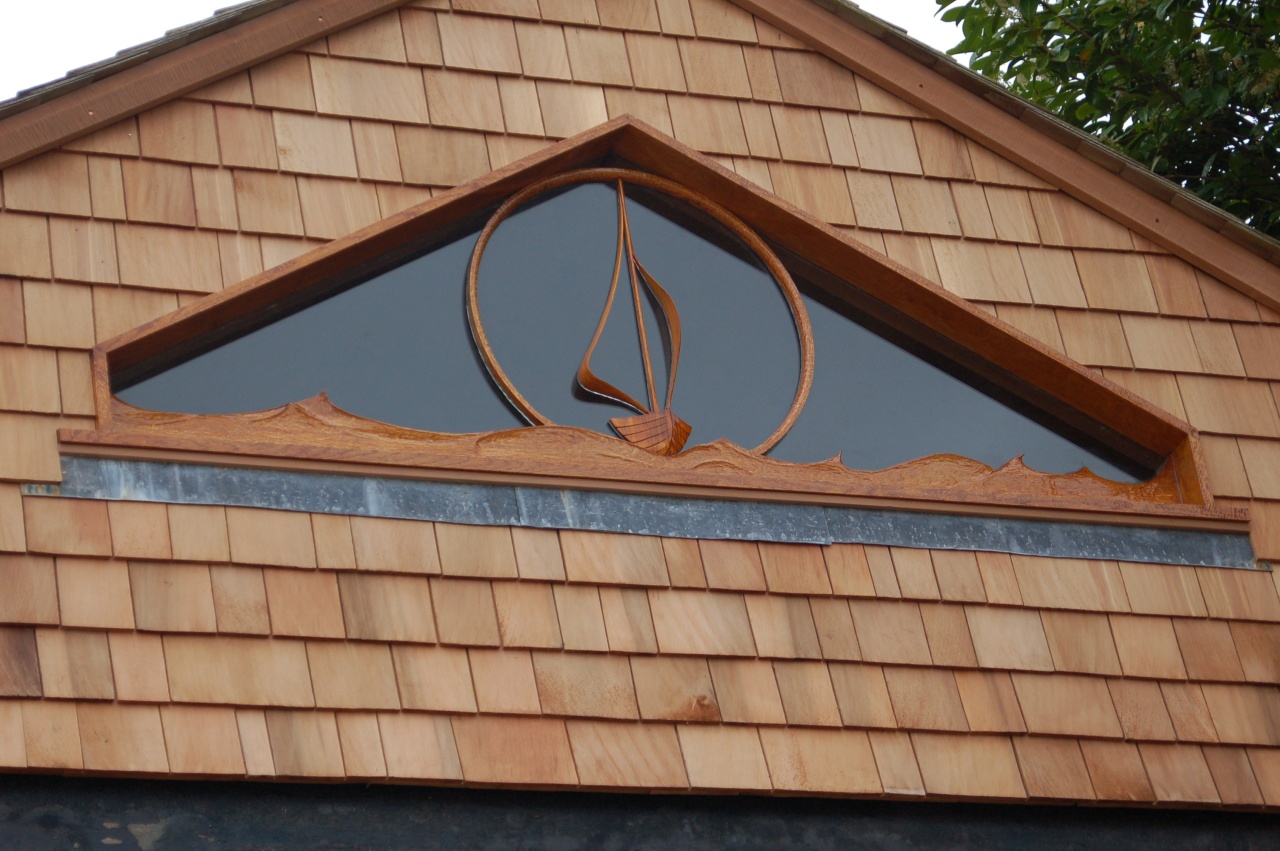 So back to the point of my value to the general populace.  This gable end is found on the sandy beach in East Portlemouth.  The beach is used all year by locals and gets very busy over Easter and the summer months.  Already I’ve had really nice comments about it from locals I know and others who happen to have seen me working on it, I can only assume that it is appreciated by more people again.  If it is noticed and remembered then it has become part of the estuary along with everything else that makes up Salcombe in peoples memories.  That is what gives me heart in what I do, and the fact that it is more than just the customers who appreciate such things.

As to one day producing a piece of work of indefinable quality, why not…  It’s as good a fiction as any to guide me through life.

Nearly a year on from making the boathouse window I received this image in my mail box as a christmas gift from the owners. It never occurred to me to take this image myself , it shows the life of the view framed against the negative of the carving, rather than the life of the carving against the negative of the dark window as I had taken from outside.  I was very touched to receive this picture out of the blue, it was a gesture outside of the transactions of business and therefore of great value to me.