The Ship of Theseus.

It’s well know that wooden boats require care to keep them in good order.  If this care is maintained a good boat can avoid the need for physical repair for many years; Sometimes though, through hard use and or neglect a wooden boat will need repair and sometimes a little more than that.

Traditionally built boats are reasonably easy to repair, they basically come apart like three dimensional jigsaws, and can be put back together as such.  Parts can be replaced like for like, materials can be matched and of course changes or developments can be made. Sometimes very little can be saved during a restoration and often the term used from then on will be re-build.  The interesting question at that point is about the identity of the boat, will it still be the original boat with 99% of the timber replaced? 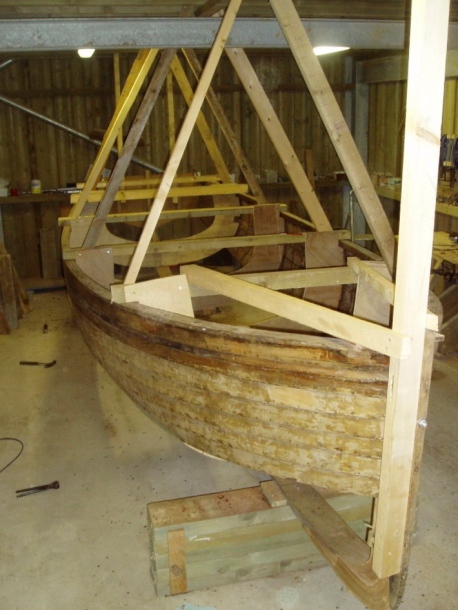 This Salcombe launch was in  the garden of a local boat historian and collector for a number of years until he managed to find her origins and contact the descendent of the original owner who took her back into the family and had her brought back to life.

Originally know simply as “The Launch”, She has had almost all of her timber replaced. The outer stem at the bow of the boat has been kept (a small piece of wood) and a little of the keel, otherwise she is all new.  There is an unwritten general acceptance that to be a rebuild there needs to be a piece of wood no matter how small left of the original boat. In my mind that’s not so important, what’s feels more relevant to me is that the boat is re-built piece for piece, old is removed as is necessary, as new is put on in turn.  In this way it feels like it’s essence is being acknowledged.  The proportions, lines, aesthetics that were decided by the original builder and that defined the appearance through her life until now can be kept; In my mind this is her identity, not the physical material she is made of.

Before the rebuild the hull was in poor condition but it was at least there, the internal joinery though was mostly missing and left a lot to be decided upon.  Again, with the belief that it’s not just the physical bits that make a thing, there are other qualities that this boat has in her history that we can acknowledge.

“The Launch” was first built sometime in the 1930’s (?).  It was commissioned by a local family, in part to help a local young boatbuilder set out on his own venture after his apprenticeship.  The boatbuilder went on to become highly respected as a craftsman and established a family business that has, in one form or another kept going until this very day.

I know that what was important to the current owner was not just to have bits of wood put back together, but to attempt to do it in a way that mirrors the values of the original build.  I was given the chance to make something very beautiful and to show case my abilities just as the original builder was.  In my mind it is this intention that strengthens her identity as herself.

By the end of the re-build even her name had been changed.  She is now named Jomara, a combination of family initials give her a less utilitarian name.  Again the name she is called at any given time has little to do with her being.

The answer to the Theseus paradox? There isn’t one of course, it’s just a question of perspective and values.  I happen to value sentiment.

–The Theseus Paradox-  Whether something that has had all or most of its component parts replaced can be regarded as fundamentally the same thing.