I’ve tried to get on with woodturning, really I have.

I was given a lathe by a good friend of mine years ago.  It has served me well for making the small bits and bobs that occasionally need to be turned for the general work that I do;  just necessary parts of larger work rather than recognisably turned pieces It’s an old and very simple machine which is how I like them.

As I was having my first thoughts of deciding on my life work I remember visiting a craft market in our home town.  There was a woodturner there with his wares and I was entranced with them, too shy to stop for long and certainly too shy to talk, I would walk by slowly many times to catch another glance and wonder at the black magic that was involved in their creation.  Just  a year later I had changed my mind.  I had by that time picked up tools for myself, cut some joints and made a few things, I can only ascribe it to youthful arrogance that, without having even touched a lathe I had decided that turning was for metal or other inert materials and that wood didn’t suit this manner of production.  It didn’t sit right with me that the machining process would be used to produce the entire product, it was too perfect for a material that wasn’t perfect.

Naomi introduced me to pottery.  I’d never given it a thought before.  She had a mug or two and a bowl or two that she had brought to college where we met.  They were made by the same potter from Devon on the whole they were part glazed and part natural clay, I guess I would describe them as earthy but fine.  Naomi had more of these “pots” and so when we made a home together they came with us. 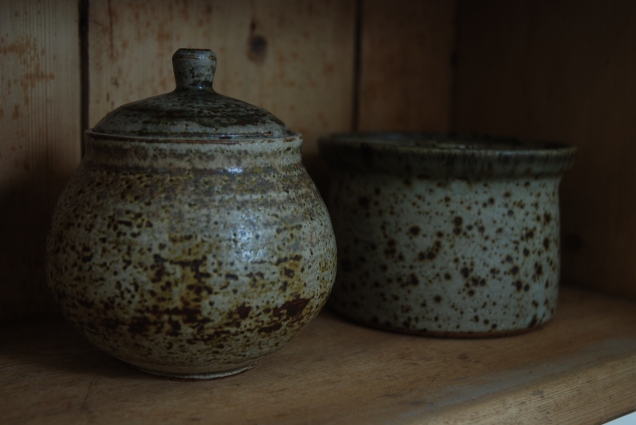 This was the medium that works.  It suites the round form; or I should say the imperfectly round form.  There is no grain to clay, no clear directional strength or weakness as with timber, with this clay you can focus on shape alone, and, if you like purpose.  The important result here is the imperfect symmetry of the final shape.  The wheel will spin on a perfect axis, but unlike wood the clay has plasticity, it has slight inconsistencies and is tooled by the soft fingers of the potter using only their eyes and direct touch as a guide.

All these “Pots” were made by Miranda Swan.  She is one of the few really gifted craftsman that I have had the pleasure of knowing.  My appreciation was a developing one; these are pots that we use every day, we have our breakfast in them, drink hot drinks out of them and they go in the dishwasher as regularly as any other utensil, it’s easy to take them for granted when you have plenty and see them every day.  I was taken once into her pottery to have a go on the wheel.  I knew what shapes I liked and what I didn’t, and whilst woefully lacking confidence in many areas of life, the ability I have with using my hands was where my confidence was stronger, I knew I would make a nice bowl.  Well I made a bowl….. of sorts.  It’s a joy to watch somebody good at their craft.  I was shown how easy it is to throw a lump of clay at the wheel and then quickly centre it before nimbly drawing the clay up into a fine shape of a bowl.  There it was, there was that magic that comes with time given to a task and the utter understanding of a material and ones relation to it.  I was witnessing the same phenomenon I saw in two my climbing friends Ben and Lucy that I climbed with as a youth, an apparently effortless understanding of their craft.  My bowl, was recognisable as a bowl, my appreciation for Miranda’s work and abilities had shifted.  Pottery doesn’t end there though, if throwing a pot is black magic then the next stage is nothing short of Alchemy. 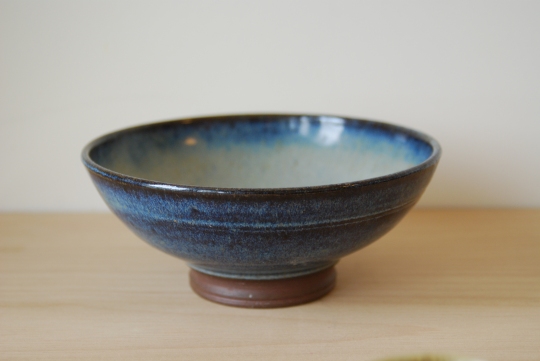 I will always be flying the flag for the hidden treasure to be found within timber, I can get excited by colour, grain, patterning and effects and enjoy bringing them in to light where and when it’s appropriate.  It’s over twenty years on from my initial encounter with the woodturner at the craft market, I find I still hold the views of the year after and can’t fully believe in a process that is simply more successfully done another way.

The magic of glazing is the realm of the chemist and the playful.  Pots are a blank canvass for colour and pattern.  I know little about glazing, the materials used or how it works, however I do appreciate the way it allows colouring, patterning and shading to be added in a way that is harmonious and balanced.  Balanced, not perfect.  Like trees; balanced, not perfect.  There’s no over-thinking With Miranda’s glazes, they are usually subtle and rich displaying an understanding of the glaze and the process rather than of overt flashy design.  This last point in my opinion is clever, and increasingly unusual in todays world; It’s easy to grab attention with bold statements but a display of real skill and belief to be able to make quiet subtle work successfully.

Miranda has become one of my greatest inspirations.  She represents to me one of those people who have true unity with their creations after having taken the long road to get there.  Those who know Miranda and know a little of her past will see the influences of her life and family in her creations, the reasons that they are simple yet aesthetically pleasing, why the colours are earthy rather than from the rainbow and why they are to be used and not just for show.  For those that didn’t know her, you can look at the pieces with the thought in mind that there is form, colour and pattern, but also a life of a born creative and the echoes of generations before.

Miranda was my Mother in law, by definition that’s a relationship that shouldn’t work, but we appreciated each other and had much to bind us.  Miranda passed last August, I miss her as a person.  As a craftsman I regret only spending that one session in the pottery with her, I always thought there would be another time.

At the beginning of it all Miranda chose pottery because as a girl she couldn’t study what she really wanted to.  She wanted to study wood turning.